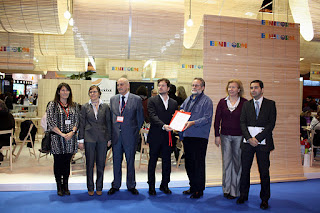 The Benidorm stand at the 32nd edition of the International Tourism Fair, FITUR in Madrid, designed by the head of the town hall Design department, Alejandro Guijarro, was honoured today by the trade fair organising committee with a 'Special Mention' award.

As mentioned by the jury, Benidorm "reuses the irony, as it did two years ago, through the use of a symbolic architecture of the national beach tourism is the "mat", reaching a credible definition of a space that transforms the story in a visual and constructive opportunity".

Similarly, the jury reflects a different stand, striking with a strong brand image, which produces a fun identification of the exposed material and the construction of the stand.

The designer of the stand, Alejandro Guijarro, has collected this certification from the hands of the coordinator of the Architecture department of the Camilo Jose Cela University, Fernando Jerez, who was accompanied by the director of Fitur, Ana Larrañaga, and the jury president, Joseph Manuel Maciñeiras.

The exhibition space,of 135 square metres,ceded free of charge to the town of Benidorm by the Valencian Agency of Tourism, includes a structure built with typical Alicante blinds, "a common and easily recognisable product that builds a volumetric concept whose use is unusual and impacts, " said Guijarro. 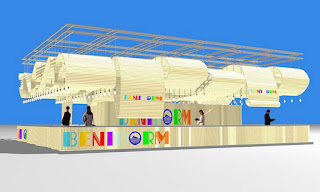 A simple display, in principle, however has produced an important visual impact of the thousands of professionals and the general public attending FITUR. The creator of the stand has stressed that in a trade show of its kind "must stand out with a powerful design to be in the spotlight. In an event swamped with different statements and messages, it is imperative to stand out for a differentiated promotional effect. " Finally, the design of the stand has been recognised and, therefore, the work of town hall Design department.

The stand has an area for business meetings with meeting tables, subdivided with their own blinds, storage areas and a bar staffed by by the Touristic Development Centre (CDT) Domingo Devesa of Benidorm. The customer service desk has a perimeter of 30 metres and is divided into different sections for institutions and companies involved.

The furniture, tables and chairs, which have been used in the stand are simple and with the same effect of the wooden slats, which use the same colour as the blinds that make up the stand, while the stools also compliment. As regards lighting, 140 60w bulbs have been used, giving a light performance of 360º.