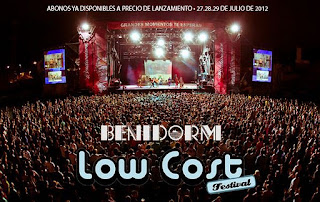 The Benidorm Low Cost Festival was presented at Fitur with the aim of attracting more than 60.000 young people during the three days of Festival.

This year, in addition to extending the event to three days, the capacity will also increase from 15,000 to 20,000 spectators at the Ciudad Deportiva "Guillermo Amor", where 60,000 young people will be welcomed on the 27th, 28th and 29th of July.

Nearly 45,000 people attended the Low Cost Festival in 2011 for a 3 day programme of music and thanks to strong investment by the organisation for technical and logistical resources, this has been one of the festivals to receive the best reviews from the media and the public for comfort, facilities, programming and sound.

Moreover, in 2012 the Low Cost Benidorm Festival will be treated as a festival of environmental awareness, joining progressive alternatives to encourage savings in CO2 emissions and the recycling of plastics and other materials using other biodegradables. Other actions are being carried out, design of ecological exchange, creation of green brigades selective recycling, collaboration with car-sharing platforms and reducing by 70% printed materials ceding to the new technologies for divulging and communicating information.

Low Cost Benidorm Festival has increased its media coverage by almost 40%, being one of the festivals with more media impact on national territory. Economic valuation in 2010 exceeded half a million euros, while this assessment in 2011 exceeded 2 million. More than 350 journalists went to Benidorm to cover the Low Cost festival contents.

Low Cost Benidorm Festival takes place on 27th, 28th and 29th of july, Friday, Saturday and Sunday, and will also give the chance for those attending to have time to enjoy all the other things that Benidorm offers if they extend their stay.

The dynamics of this year remains the same, as in previous years, and after announcing seven national bands, the Benidorm Low Cost festival will begin in the next few days to reveal its first international names and other activities.

Low Cost Benidorm Festival is presented as an event that not only projects their activities to a loyal repeat public but is also an ambassador of the image of Benidorm to young people, which adds to the profile Benidorm already has and positions itself in the cultural press at a national and international level. Furthermore, the presence of the festival is evident during all the year throughout the social media networks.