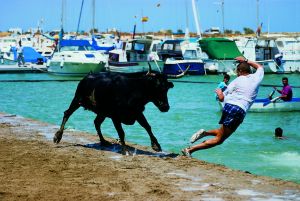 This week, the Marina Alta region is holding one of its most traditional festivals, the "Festa Major 2013 de Denia", a unique opportunity to explore this great destination and enjoy a festive break. The festival is a lively blend of music, fireworks, children's games and bull running, featuring the traditional "Bous a la Mar" (bulls by the seaside).

This year, to commemorate the 20th anniversary of the declaration of "Bous a la Mar" as a Festival of National Tourist Interest, the programme will be featuring other activities such as livestock displays alongside the bull running.

Main Fiestas in Honour of the Holy Blood (July, from 6th to 14th)

DAY OF THE SANTÍSIMA SANG: that is a bankholiday in Dénia and takes place the second wednesday after Sain Peters Day. The Festa Major programme begins the saturday before and ends the next sunday.

The programme includes religious celebrations and other activities such as sports championships, children activities, concerts and much more...
The most traditional activities are:
www.onasol.es
Posted by Ona Sol Hotels at 10:22