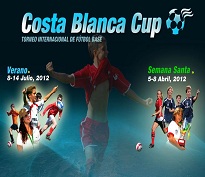 The Easter Costa Blanca tournament has now reached its 7th edition. The main venues for the tournament are Benidorm, La Vila-Joiosa, Altea and Calpe.

The tournament will take place between the 5th and 8th April. Thursday 5th the teams will be welcomed at the organisers offices, at the Hotel Mediterráneo, where an age control will take place and all official documentation will be presented. Friday 6th and Saturday 7th matches will be held throughout the day as well as the the qualifying games amongst the first classified to see which teams will play in the final of each catgeory. Sunday 8th the finals will take place at the Rincón de Loix football pitches.

For this edition there are a total of 30 clubs, participating, 80 teams of differing categories. Most of the participating teams are Spanish but there are also clubs from Scotland, France and Portugal. Within Spain participate teams from Cantabria, Castilla – La Mancha, Castilla y León, Cataluña, Comunidad de Madrid, Islas Baleares, País Vasco and of course from the Comunidad Valenciana.

Aproximately 1100 personas will stay in various establishements offered by the organisers, which means more than 3000 room nights during the Easter high season.