272th Commemoration of the Finding of the Virgin of the Suffrage 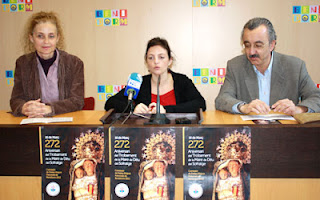 At the time of the dawn on Friday 16th of March the image of Our Lady of Suffrage, patron saint of Benidorm, will walk along the beaches of the town to mark its arrival in the town 272 years ago. The Major Patron Festivals Commission and the Department of Festivities have developed a full program of activities for the Finding.

On Friday, 16th of March, about 5:30 pm, will sound an air raid at the time of dawn, with bell ringing and prayer to Our Lady of Suffrage in the Plaza de San Jaime. Following the opening of doors of the temple, the image of the patron will walk through the streets of the Old Town and the beaches of the town, ending with the traditional verse recited to the Virgin this time by Carmela Soria.

In the afternoon, at 20 hours, concelebrate Mass in honor of the patron, headed by Pedro Juan Diaz, the son of Benidorm, sung by the Choral Group Benidorm. But the acts of the 272 anniversary will begin this Saturday, 10th of March, with a Mass in the parish of Sant Jaume and Santa Ana, at 10 hours, followed by a ringing of bells.

At 17 hours will be the entrance to gangs and collection of the Virgin of the Suffrage at its headquarter in La Barqueta. At 17:30 pm a salute will be fired in honor of the patron on the Paseo de Colón. The solemn procession will pass through the Paseo Colón, Plaza de la Creu, Alameda, Calle Mayor and Plaza de Sant Jaume, where the offering takes place.

Then it will be sung the traditional 'copletes'. On Sunday 11th of March there will be two concerts, one at 12 pm in the Plaza Mayor, in charge of the Musical Union of Benidorm, and another concert at 20 hours, by the Rondalla of ACR La Barqueta in the church of Sant Jaume and Santa Ana. On Tuesday 13th of March will be a lecture by Vicenta Perez Bayonne, on 'The Mare de Deu del Sofratge i copletes'. It will be at 19 hours in the auditorium of the Casa del Fester.

Finally, on Thursday 15th of March, at 18 hours, winners of the X Contest of Drawing and Painting La Barqueta will receive their awards in the town hall.