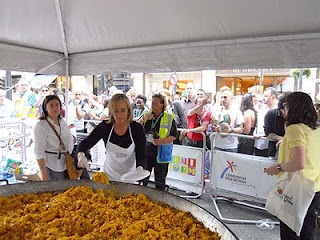 Benidorm has actively participated in the latest edition of  'A Taste of Spain 2010', held in Regent Street, London. Along with the brands of Valencia and Costa Blanca, Benidorm has been present in three different information points throughout this central London street, with a four square meters stand, from 12 to 19 hours. The stand has distributed promotional material as 'Leisure', 'Routes Sierra Helada', 'Hotels', and the tourist map of the city.

Beside each one of these promotional items were three giant paellas at 14, at 15:30 and at 17 hours. Each tent set up for the three paellas included Benidorm logo on the security fences.

Throughout the pre-event promotion several actions were made, which included mentions of Benidorm, as published in a special page on Spanish holiday destinations accused in the 'Daily Telegraph'.